Artists Ashley Pryor Geiger, Barbara WF Miner, and Lee Fearnside created The Holding Project (THP) activities as a response to the rise of anti-AAPI (Asian Americans and Pacific Islanders) violence in the past few years. The Holding Project is an invitation to the community to voice  their feelings around the questions: “What makes you feel safe?” and “What makes you feel unsafe?”

In the spring of 2021, concerned by the reported upsurge in violence directed against members of the AAPI (Asian Americans and Pacific Islanders), three artists met to discuss what role art might play in addressing this problem. The artists were sensitive to their outsider status, they were aware that they could not “speak for” a community to which they did not belong. And yet, action in response to this situation was critical; saying or doing nothing was to ignore and give tacit approval to the violence. The artists considered their own personal experiences with violence and marginalization and reflected on the increasing polarization of American society that makes it difficult to share these experiences.

The art is meant to provide a safe space for a community dialogue about feelings of safety and unsafety and how these feelings about community broadly shape individual’s lives. The community’s anonymous responses are at the core of the project and demonstrate the concerns of the participants, whether they address the global, headline issues confronting  society, or the very personal issues of food insecurity or person-to-person violence.

The Holding Project encourages this dialogue.

The project is both a participant-activated social artwork and the creation of an artifact and archive  of community responses to contemporary culture. The physical book is handmade. It is important to remind participants that human hands spent time making the cards and the books, to enforce that there is care and commitment in the act of connecting with the community. The book takes the form of a concertina structure with pockets to “hold” small response cards completed by the community. The structure of the book allows it to expand infinitely as individuals add responses, cumulatively creating a picture of our society. 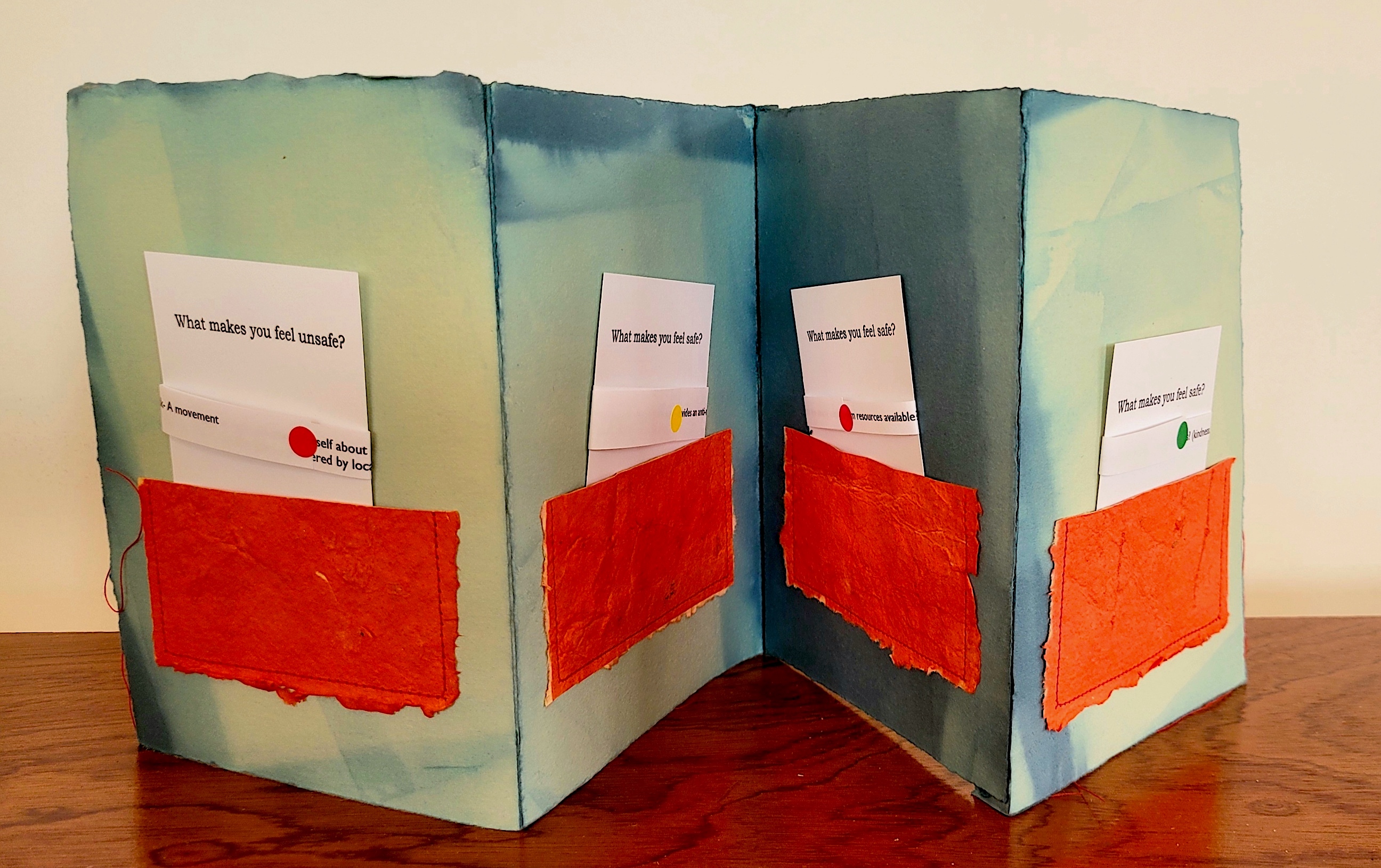 The Holding Project debuted as a community-engaged project at the September 2021 Momentum Festival in downtown Toledo, Ohio. The project connected with festival visitors who wrote and drew on baseball card-sized response notes. Out of that success, The Holding Project next created and distributed kits (including sample book pages with pockets, colored pencils, didactic materials and response cards stamped with prompts) to each of the 20 Toledo Lucas County Public Library branches. Over the course of just two weeks, there were more than 150 response cards from members of the community. All cards were collected and, uncensored, will be scanned and archived as part of The Holding Project website currently under construction. The project has also exhibited at the Carlson Library (University of Toledo), the Toledo Museum of Art Library, and at the International Visual Literacy Association conference in Finland in August, 2022.

Ashley Pryor Geiger is an interdisciplinary artist and scholar (Ph.D. Philosophy, The Pennsylvania State University, 2000), who lives and works in Toledo, Ohio. Drawing on her extensive research and teaching in the humanities, her visual work uses digital collage and the manipulation of old photographic processes like calotypes, ambrotypes, tintypes, and daguerreotypes to create a bridge between the past and the present - especially as it relates to those who have been forgotten, overlooked, or underrepresented in history. Her work takes up the strategies of “détournement” - a technique of “rerouting” dominant cultural assumptions first developed in the 1950’s by the Letterist International. Her work is most closely affiliated with this movement, even as it is tempered by a healthy suspicion of any form of ideology or dogmatism.

Geiger works with new technologies such as AI algorithms and special effect filters to simultaneously uncover neglected aspects within the original photographic image, but also the viewer’s own assumptions about the historical past and how it informs our contemporary self understanding.

Geiger has participated in three Artists Labs through The Kolaj Institute, her collage work was recently exhibited in Birr, Ireland, and August, and the Limner Gallery (N.Y.) late summer. Her works have appeared in numerous online print publications. She was the recipient of the 2021 Arts Commission Merit award to support her work bringing collage arts to incarcerated people at the Toledo Correctional Institution through the Inside/Out Prison Exchange Program.

Lee Fearnside has been making art since she was a child in suburban Boston. Her art has always been about personal narrative, storytelling, and social change. She came out through her photography in high school in the early 90s, and since then has been making and curating art to encourage social change. Fearnside earned an M.F.A in Photography from the Rhode Island School of Design, a M.S. in Arts Administration from Drexel University, and a BA from Smith College. She moved to northwest Ohio in 2007, and for ten years was Associate Professor of Art and Director of the Diane Kidd Gallery at Tiffin University. There, she co founded the EVAC Project, an organization that connects veterans and artists to educate the public about life in the military. EVAC Project art and stories have been exhibited at Cleveland Hopkins Airport, Walter Reed National Military Medical Center, Reagan National Airport, the Army Transportation Museum, the Rutherford B Hayes Presidential Center, and academic galleries across the country. She is the Director of Annual Giving for Bowling Green State University, and lives in Toledo with her wife and son.

Barbara Miner holds the position of tenured Professor and Chair in the Department of Art, at the University of Toledo, in Toledo, OH. Her mixed media sculptures, installation works, and paintings, informed by the nexus of human/nature interaction, and the practice of meditative repetition, have been exhibited nationally (Maine to California) and internationally (Sweden, Finland and Poland) in over 50 exhibitions.

She has curated three events, including a lecture/workshop with the noted Photographer, Rosamond Purcell and the sculptor Dewey Blocksma. Miner has participated in numerous national and international artists’ residencies. She has presented at national and international conferences and contributed articles to Ceramics Monthly, Dialogue/Arts in the Midwest, and the journal published for the International Conference on Environmental, Cultural, Economic & Social Sustainability. She is a finalist for the UpTown Shade Sculpture Project, Toledo, Ohio sponsored by the Arts Commission. Miner has received both internal and external grants in support of her research and art practice, as well as numerous Awards for Excellence/Merit.