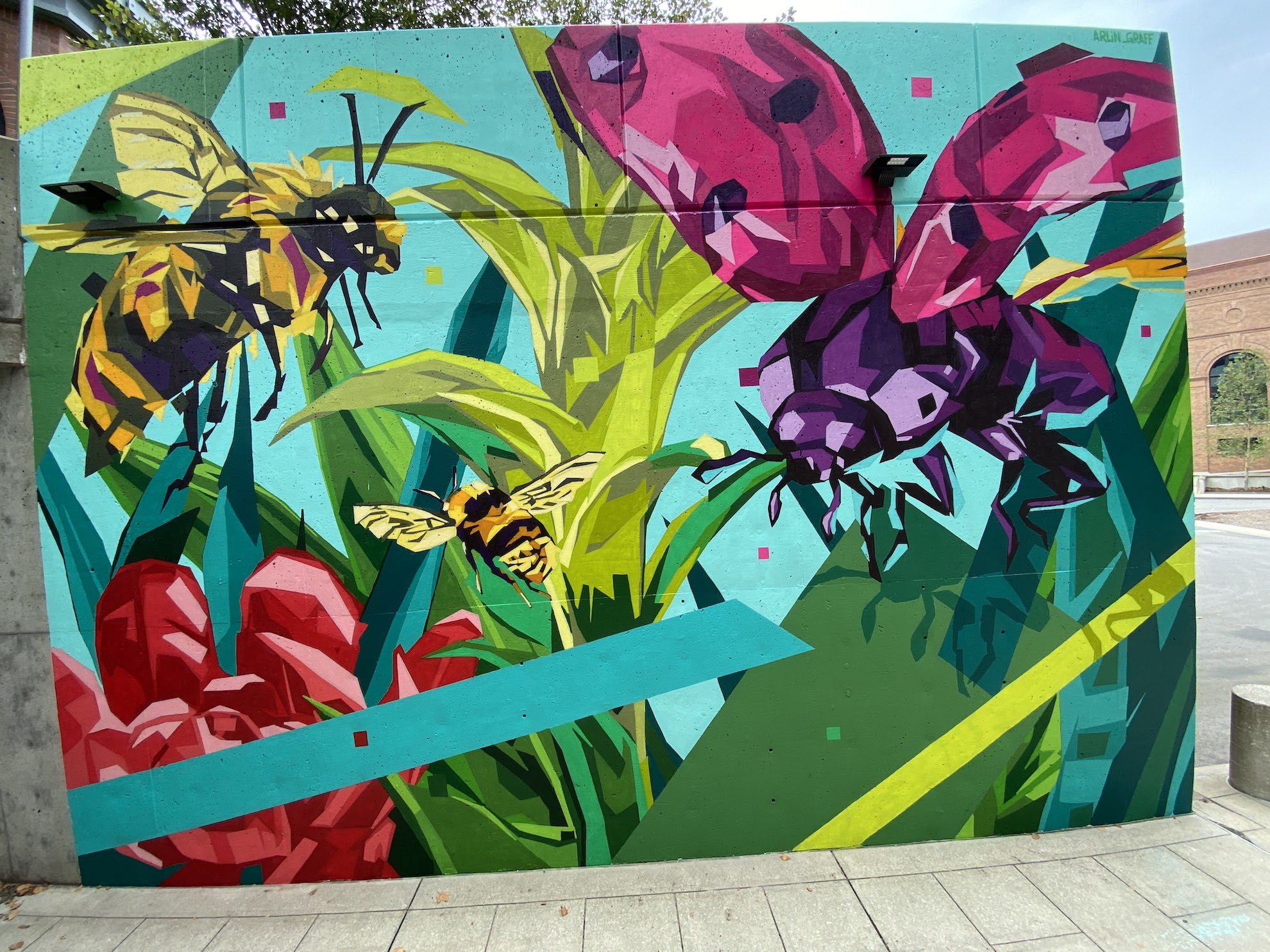 Arlindo de Oliveira is an internationally acclaimed Brazilian artist currently based in Fort Lauderdale, FL. When asked about the design Arlin said, “My concept is to create a bold and colorful large-scale lush botanical landscape featuring bees, ladybugs, and caterpillars. The dynamic landscape will stretch across all five of the site’s walls, creating a cohesive and immersive viewing experience. My murals use geometric fragmented shapes to depict wildlife in motion, and in keeping with my artistic style, the Water Street mural will depict the featured insects, flying and climbing among the plant life, the entire scene composed of bright geometric fragmented pieces. When people see this mural, I hope that they will feel energized and optimistic, inspired by the bright colors and movement of the wildlife.” 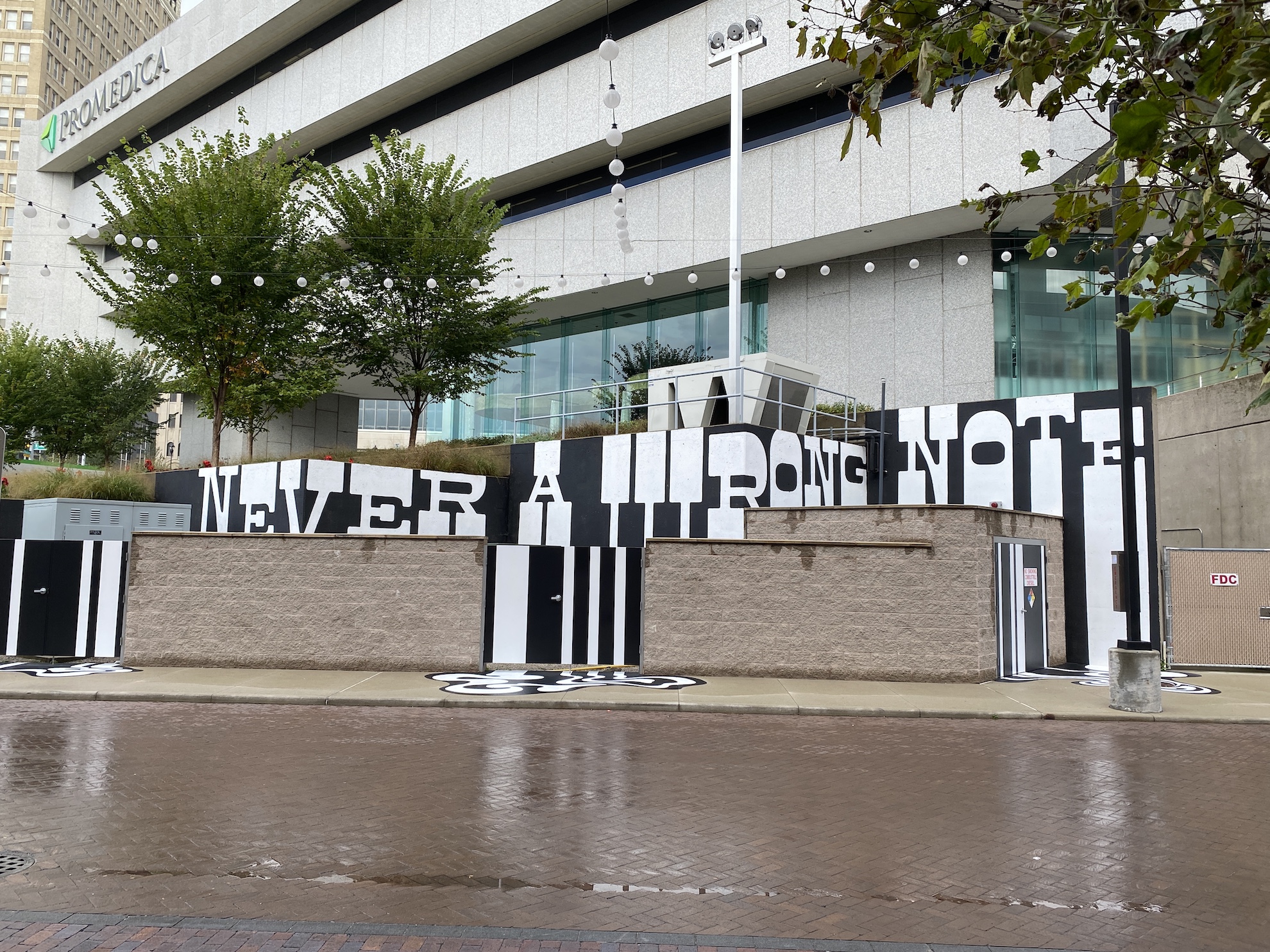 Bradley Scherzer lives in Toledo and currently teaches art at Fremont Ross High School in Fremont, Ohio. Much of his recent work has been organizing and engaging communities and youth in public art-making. He also creates large-scale murals and art installations.

Jacob Parr is a Toledo-based cross-discipline designer, co-creator of Sparr Games, and board member of AIGA Toledo.

When asked about their design, Scherzer and Parr said, “ Leaning into the link to Art Tatum, utilizing the quote: There’s no such thing as a wrong note. The sentiment plays off the idea of embracing mistakes, through the lens of music. No matter the direction, each step we take is progress in our making. Black and white, right or wrong—even the missteps, mistakes, happy accidents, and wrong notes push us onward. If we are the sum of our experiences, let those experiences overflow with the unexpected opportunities that only failure can create. It is never a wrong note by which we will be judged, but the notes that follow. 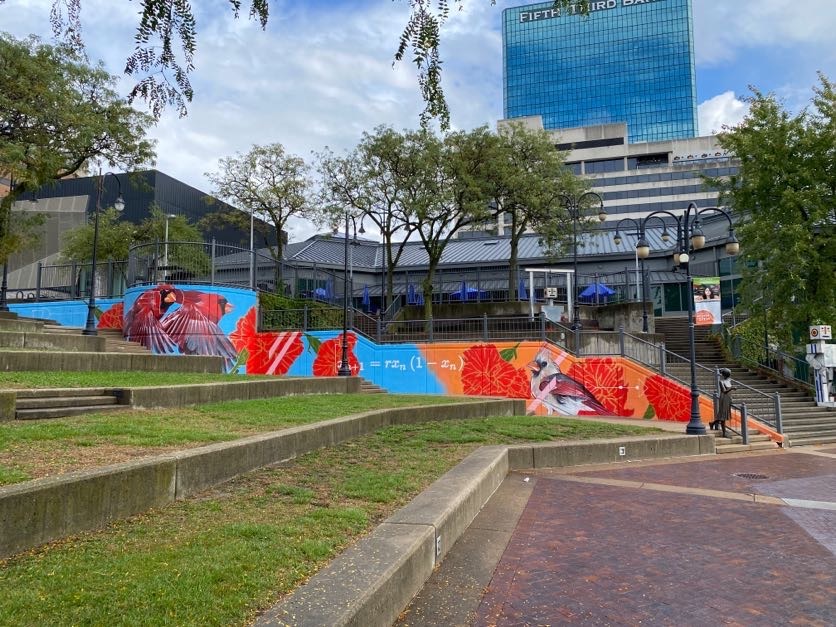 JUURI aka Julie Robertson is a Tokyo-born Japanese+American artist whose colorful work is inspired by traditional Japanese art. She says this about her design, “It features realistically-painted cardinals (Ohio state bird) and stylized carnations (Ohio state flower) in a dynamic balance. The background color of the wall is a blue/orange fade, and are the colors used in the Imagination Station site branding. I wanted this piece to have elements that visually gave clues about the Imagination Station in close proximity, but still had a feeling of a street art piece, which hopefully people will be excited to photograph and share on social media. Some themes I hope this piece conveys are flights of imagination, possibilities, and joy of nature.” 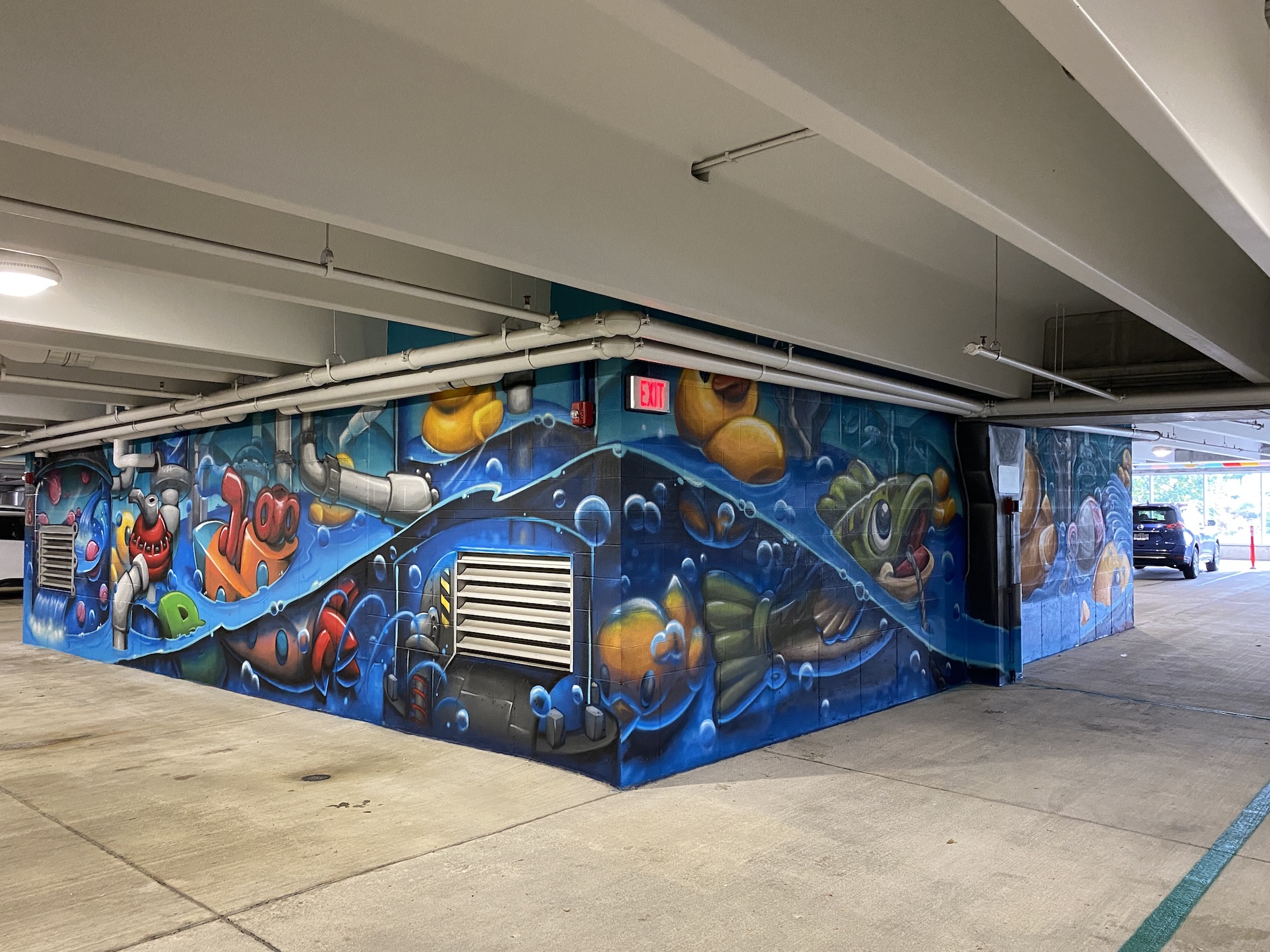 Tony Touch aka Tony Zawisza is a Toledo-based tattoo and mural artist. In reference to his design, Tony says, “I mashed up the various fountain machinery in real life with visuals from a child’s imagination. It makes for a fun juxtaposition, to have both work and play in the water. I chose not to camouflage the pipes and exhaust vents of the pump house, but to embrace them. I want to take these four cement walls and transform them into a half-filled aquarium full of oversized bath toys in a mad plumber’s experiment. Keeping with a semi-industrial vibe, I feel it fits the setting within the garage area, as well as a subtle nod with the history of the Edison steam plant. Scattered throughout the mural are more Toledo easter eggs. Blue, navy, and yellow are prominent for Toledo’s official city color palette. The tug boat is modeled after the Schoonmaker; pink baseballs and toy walleye for our local sports team. The paper boat also has a slight resemblance to Promedica’s logo.”

In September and October of 2020, The Arts Commission of Greater Toledo’s Art in Public Places Program facilitated the installation of a suite of five murals. Through curation and design review board processes these works highlight the strength of collaboration between public and private investment in the arts. A special thank you to the City of Toledo and ProMedica for their continued support of the arts and investment in the beautification of Toledo’s riverfront infrastructure.

Toledo Concourse Murals featured artists include: Ken Dushane (Toledo, OH) and Timothy Robert Smith (Los Angeles, CA). The Water Street Murals were completed with curation support provided by Dustin Hostetler and features artists Maya Hayuk, "RBG" (Brooklyn, NY) Louise Jones aka Ouizi, "Green Space" (Detroit, MI) Yusuf Lateef, "Naima Finds A Cicada" (Toledo, OH). Each artist’s unique style contributes to a visually dynamic corridor that improves the infrastructure of the existing architecture. The murals create a welcoming atmosphere for pedestrian traffic and encourage people to stop, photograph, and spend time along the riverfront. The Water Street murals are an extension of the legacy of public art in and around Downtown Toledo started by the Art in Public Places Program in 1977. 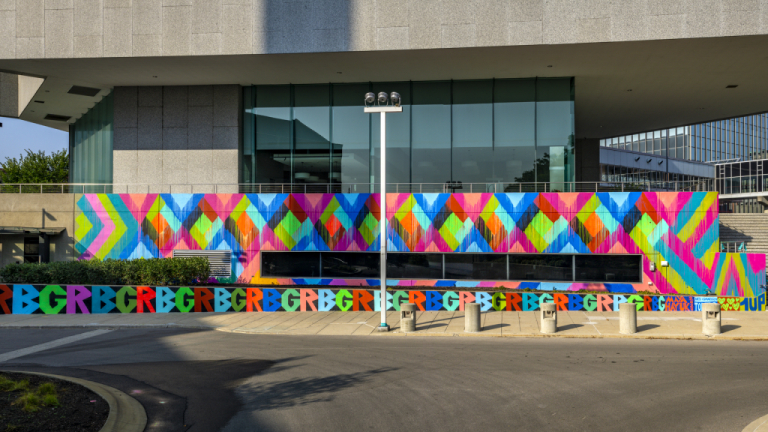 Maya Hayuk’s paintings and massively scaled murals recall views of outer space, traditional Ukrainian crafts, airbrushed manicures, and mandalas. Hayuk weaves visual information from her immediate surroundings into her elaborate abstractions, creating an engaging mix of referents from popular culture and advanced painting practices alike while connecting to the ongoing pursuit of psychedelic experience in visual form. She has painted her iconic outdoor murals all over the world and, when not traveling, maintains an active studio in Brooklyn, sketching in paint to inform the large-scale works. She sees her studio painting practice and mural making as both inversely relational and symbiotic. 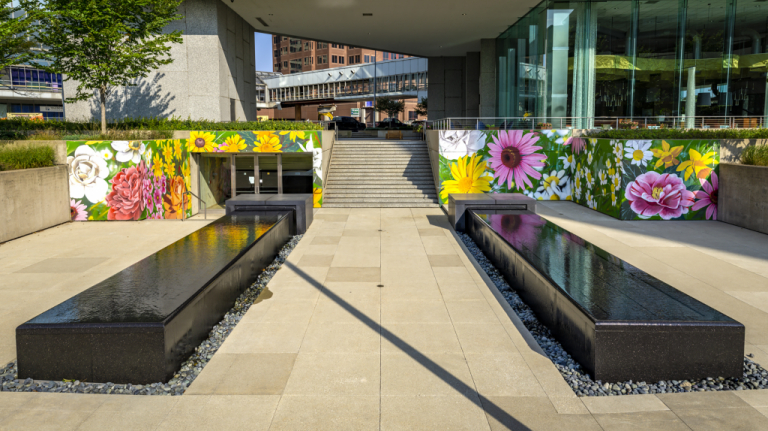 Louise Jones (née Chen), aka Ouizi, was born and raised in Santa Monica, CA to Shanghainese parents. She is best known for her large-scale floral mural installations which can be seen in public spaces throughout the United States, from museums to public parks. The murals often depict site-specific plants and animals, and the techniques are uniquely informed by her education in drawing and printmaking. Her affinity towards botanical subjects continues to grow, stemming from an early introduction to Georgia O’Keeffe and fond memories of picking figs with her grandmother. She currently lives and works in Detroit. 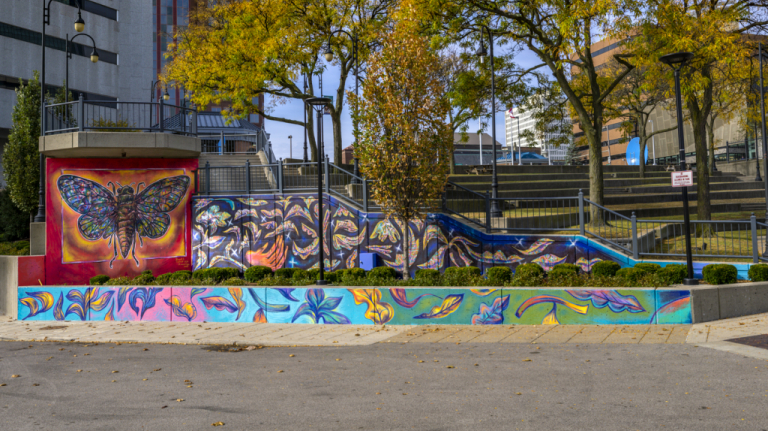 Yusuf Abdul Lateef is a visual and performance artist that works collaboratively to create positive and vibrant public works. Lateef is a Young Artist at Work 1994 alumni that went on to become one of the first senior apprentices. Lateef then became an Artist Instructor and Artist Clinician. Since then, he has completed over 16 murals and multiple workshops including projects for Toledo Public Schools, The Toledo Fair Housing Authority, The Toledo Museum of Art, and Bowling Green State University. In addition, Lateef is a co-founder of a for-profit arts collective, Radiant City, where participants are able to share their thoughts and energy while using the fundamental elements of the creative process for self-empowerment. He earned his BFA in the field of painting and drawing from the Columbus College of Art and Design and a Masters of Fine Arts degree from Bowling Green State University with a focus on social engagement as art practice.

Ken Dushane is a muralist, designer, and educator, who wears a lot of hats. From chasing down large-scale mural projects across the country to teaching youth in his community, he has always had a passion for using his talents to give back. Ken was raised in Belleville, MI he started his art career in Detroit, MI in 2013. Now he has transplanted to Toledo, OH where he resides with his family of seven. He is an instructor at the College for Creative Studies in Detroit and an alumnus Young Artist at Work instructor here in Toledo, OH.

Funded by the City of Toledo's One Percent For Art Program

Timothy Robert Smith is a painter, muralist, and multi-media artist, combining realism with cinematic design to create vibrant images that stand the test of time. His work fuses together multiple perspectives into one kaleidoscopic vision, exploring our cognitive understanding of time and space. His art has shown in solo exhibitions at museums, TEDx conferences, and several galleries; being featured in media outlets that include Juxtapoz, Artillery, NBC, and KCRW. He has created a plethora of public murals around the United States and Japan, working with businesses, universities, and city leaders to create permanent public art to help beautify the community.

Funded by the City of Toledo's One Percent For Art Program 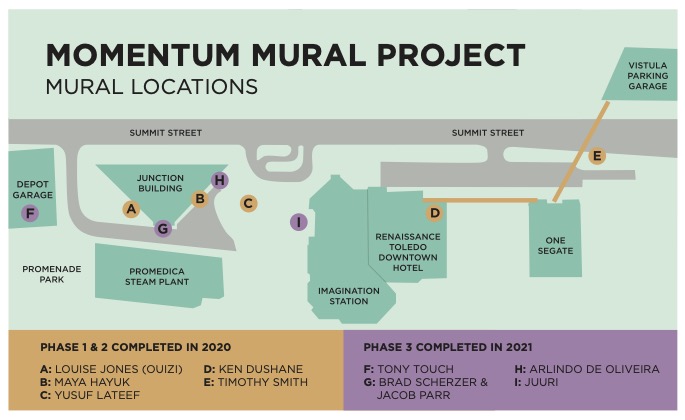